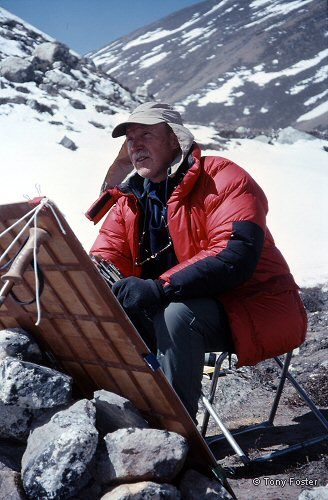 Tony Foster was born in Lincolnshire, England, in 1946. His home is in Tywardreath in Cornwall, UK, though he travels extensively to make his work.

Since 1982 Tony has created a series of 'watercolour diaries' in the world's great wildernesses.

Travelling mostly on foot, by raft or canoe, his adventures have resulted in ten major exhibitions, and material from seven exhibition catalogues is featured on this website.

His exhibitions usually tour galleries in Great Britain before going to the USA where most of his work is sold.

Articles by or about Tony Foster have appeared in many publications. His work has also been the subject of a television documentary and a Radio broadcast.

For a full list of Collections see the CV page

In 2001 the Council of the Royal Geographical Society conferred upon Tony Foster the Cherry Kearton Medal and Award for artistic portrayal of the world's wilderness areas.

In 1988 he was awarded the Yosemite Renaissance Prize. In 1994 he was elected Fellow of the Royal Geographical Society.